I watched Green Lantern this past weekend and enjoyed it. I thought the story was good, although a bit lacking in surprises. The CG effects were great and finally brought the Green Lantern characters to life in way I would not have thought possible a few years ago. Although I was a sceptical at first Ryan Reynolds was a good fit for the role of Hal Jordan and Mark Strong is the perfect Sinestro.  The movie has a good ending (very important to me) and provides the possibility of a sequel. My only complaint is that I would have liked to see a lot more action involving the Green Lantern's powers. The Green Lantern is fun, entertaining and certainly worth the price of a ticket. I give it a solid 7 out of 10.
Posted by J. A. Sanderlin at 6/22/2011 09:33:00 PM No comments:

They're not as great as sharks with laser beams on their heads, but much more useful...


I found the sixth paragraph particularly interesting, "...missiles with electronics-disabling capabilities, rather than just explosives..." Sounds like a deployable explosive EMP device.
Posted by J. A. Sanderlin at 6/21/2011 05:10:00 PM 1 comment:

I saw "Green Lantern" over the weekend.  More on that in a subsequent post.


Otherwise, we got a lot going on over the last week or so.  And of course, your bi-monthly dose of Europa news (did you think I'd forget?).


The reason this piece of news is here, on this blog, is because I'm trying to be a one-man lobby group for NASA (or ESA) to go to Europa, or ANY place within driving distance that might possibly be habitable (or better yet, already be inhabited). One of the many conditions for life?  Geomagnetism.  Oh yes, folks, it's complicated.  But this blog/website does a pretty good job of laying out the basics.


Among other things discussed, someone asked a question about life on Europa.  Given the potentially very thick layer of ice, the scientist answering the question is ... shall we say cautiously hopeful?


Speaking of hopeful, I want you guys to know that ... NASA NEEDS TO GET THEIR BUTTS OUT THERE because as Marc Kaufman states, if you're looking for it, you might find it.  But here's the kicker ... you actually have to go look for it.  The likelihood of all of it coming to us is small.


I tweeted this earlier but it bears repeating.  8 wonders of the solar system.


In just a few minutes, Enceladus may be the new Europa.  For more info on that issue, see also this post.

I started watching this movie on Netflix the other day and found it very interesting. Not in a good way. I think I remember seeing a movie that was worse than this one time, but I purged the memory from my brain with a regimen meditation, beer and pounding my head on a door jam. The introduction of the film was predictably B-grade (at best), but seemed to degrade to what can only be described to D-level. In one of the opening scenes there is a character who cannot be older than 20 wearing a fake beard attempting for portray two other characters, of the same ages, father. When I realized my mouth was open and I was staring with shock at the horror of it all I began to laugh uncontrollably. I fast forwarded to several other places of the film to see if there was any hope of it improving, but, alas, there was not. The only reason I can think of that Billy Zane decided to appear in this film is that he was doing some pro bono work for some college students or something...At least that would be my story.

I would not recommend this movie to anyone unless they want a good laugh (if the creators intended it to be funny you may add three or four points to the review number).  Although not the worst ever, this was certainly one of the worst movies I've ever seen. I give it a solid 2 out of 10.

I watched the latest X-Men film this weekend and must say I was impressed. I particularly enjoyed the portrayals of Professor X by James McAvoy and Magneto by Michael Fassbender. I felt engaged by the characters from the beginning and did not lose the sense of caring what happened to them through the end. There were a few cameo appearances, my favorite was Wolverine's, which were amusing. Warning to parents: Wolverine's appearance contains the only serious language incident in the film (F bomb). There are a few implied adult situations and the rest of the language is minor. I Liked the storyline and thought it contained enough surprises to keep even the most 'that was totally predictable' guy entertained.
I usually prefer to keep my higher ratings for movies that really impress me to the core, but I liked X-Men: First Class a lot and recommend it to people of all ages and interests.  I give it an 8 out of 10.

White Holes and other interesting tidbits

Up to this point, white holes have only existed in a sort of yin-yang, physics law, theory world and, of course, in the hearts of many a fellow nerd out there in cyber-space.  Well, look-out universe, sometimes nerds can be right!  [A lot of the times we're right but only sometimes are we given any credit.]

Jupiter is responsible for protecting Earth, and Mars, and tiny little Mercury (etc) from numerous objects that we really don't want hitting our atmosphere, oceans, land ... but it turns out that Jupiter may have also prevented Mars from getting bigger.  Well, I say, you take the good with the bad.

And because I just couldn't resist, here's a pretty picture or two (just follow the link for more pictures) of Europa and a couple of other of Jupiter's moons.  The post reports that ESA and NASA are currently planning a trip to Jupiter.  And while I would argue that anything has been decided (thank you, economy and short-sighted budget planners), I applaud the optimism.

First of all, let me say a big "THANK YOU!!" to all the folks who stopped by and also those who bought a book.  I really, really appreciate your support.  For those who bought, or will buy later on Kindle or Nook, please let me know what you think!


Second, the review and the photos (what you've all been waiting for, really):


I really enjoyed the con.  I wasn't crazy about the layout; there were a lot of zigs and zags which "forced" people to create their own shortcuts.  Don't get me wrong, I like that people were paraded by me.  But the layout was confusing and I can imagine that it was frustrating for con-goers.  Other than that, the traffic was amazing.  H-town brings it when it comes to cons so if I have anything to do with it, and sometimes I do, I will be back again.


Here are a few of my favorite costumes and exhibits: 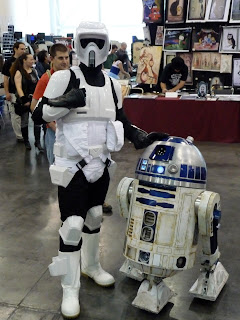 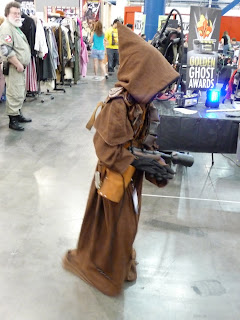 Also, can anyone tell me why the Ghostbuster genre is still popular?  I loved the movies ... and I know there were comic books and a cartoon series but some of these folks weren't alive when the movies came out so ... I'm just wondering.
Thanks for stopping by!
Posted by J. A. Sanderlin at 6/01/2011 10:50:00 PM No comments: